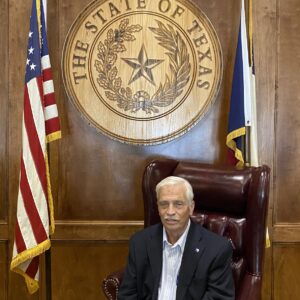 Jim Mooney was elected to the Board of Commissioners on November 3, 2020 and was sworn into service on January 1, 2021.  Commissioner Mooney has lived in the Pearland area since 1962 where he has worked in a variety of industries including a chemical plant serving as Chairman of Oil Chemical & Atomic Workers Group as well as serving as an interim Secretary & Treasurer of Local 4-227.  Jim also acted as a substitute teacher for Pearland Jr. High and Pearland High School.  Commissioner Mooney’s service within the community consists of serving as a Deacon at Pearland Church of Christ Grand Street, City of Manvel City Administrator, President of Pearland FAA Booster Club, and was a Charter Member assisting in the formation of the Lions Club of Manvel.  He retired from Cherry Companies as V.P. of the Crushed Concrete Division.